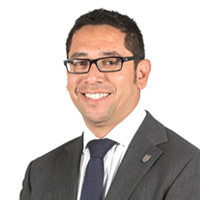 Professor Rodriguez-Escobar holds a full professor position at Universidad Europea Miguel de Cervantes in the department of Social Sciences. He is the program director of the MBA and MBA programs. He is dedicated to university teaching, knowledge transfer to the society, and academic research. He believes in continuous improvement as a fundamental principle of professional and business growth.

Professor Rodriguez-Escobar has many year of top management positions in the academia during which his results-orientation, pro-activeness and problem-solving capacities led to significant achievements. As vice-rector of faculty, he successfully developed the professorial corp of the UEMC, before shifting to the position of vice-rector for employment and innovation. Under his leadership the UEMC at the top of the ranking for employability: according to the IVIE Ranking of the Fundacion VBVA, in 2018, UEMC ranked  in the top 20 university (2nd private university) in Spain for employability. In 2017 HACU has awarded the UEMC with New York Award 2017 for innovation and educational excellence.